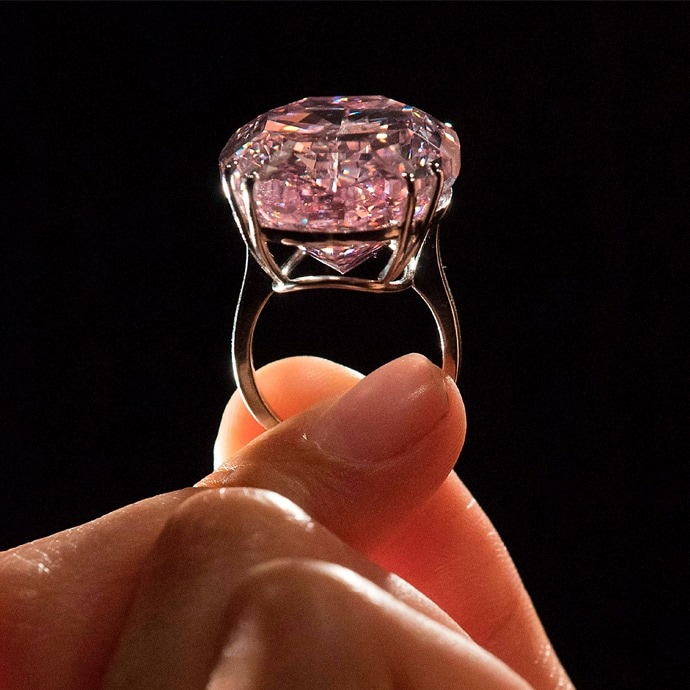 Another rare beauty, which was once owned by jeweler Harry Winston, is the absolutely stunning Graff Pink. It features a highly revered “fancy intense” pink diamond that weighs over 24 carats. The splendid emerald-cut center stone with rounded corners is set on a platinum ring and is accompanied by a diamond on each side.
The Graff Pink, famed for being “one of the greatest diamonds ever discovered”, was sold for a staggering US $46 million by Sotheby’s auctioneers in Geneva, Switzerland in November 2010.

With its jaw-dropping beauty, the Hope Diamond is undeniably one of the most spectacular jewels in the world. Its ownership records date back to almost four centuries and it is believed to have been originated from the famous Golconda mines located in southern India. The striking blue diamond weighs over 45 carats (about the size of a walnut), and was last reported to be insured for US $250 million.The Hope Diamond’s reputation for being cursed is as famous as the gem itself. Rumors were rife all along about it bringing death and misfortune to the owners and their family members. This, however, stopped soon after New York gem merchant Harry Winston donated the jewel to Washington’s National Museum of Natural History in 1958, where it’s currently on display.

Weighing 217.80 carats, this fascinating rectangular-cut emerald is a masterpiece belonging to 1695-1696 AD. It is believed to have been originally mined in Colombia and then sold in India, where emeralds were highly valued by the rulers of the Mughal Empire.It is recognized around the world as the “Mogul Mughal’ and showcases Shi’a invocations inscribed in elegant naskh – a specific calligraphic style for Arabic writings. The other side of the emerald is engraved with floral motifs, mainly large poppy flowers.
Currently, the Mogul Mughal Emerald is at the display at the Museum of Islamic Art, Doha, Qatar, after it was acquired from the Christie’s for US $2.2 Million.

Guntur in Andhra Pradesh, India, is believed to be the location where the Koh-i-Noor was first discovered, possibly in the 13th century. The name of this astonishing diamond translates to “Mountain of Light” in Persian, and it was originally said to weigh an incredible 793 carats in the uncut form.The Kakatiya dynasty of South India was thought to be the first to own this magnificent gem. But, it travelled wide and far in the next few hundred years, before being possessed by Queen Victoria after the British conquest of the Punjab in 1849.
The Koh-i-Noor diamond, today, weighs approximately 186 carats and is part of the Crown Jewels at the Tower of London. Not just India, but Iran, Afghanistan and Pakistan too have claimed ownership of this gem. Their demands to return the Koh-i-Noor have remained futile as the British government insists this diamond was obtained legally under the terms of the Treaty of Lahore.

The ‘Blue Giant of the Orient

The ‘Blue Giant of the Orient’ was bought by an anonymous American collector in the same year it was discovered, but made a public appearance only in 2004 at Christie’s Magnificent Jewels auction catalog. Shortly after the auction Christie’s was able to strike a deal with an anonymous British buyer who purchased the astonishing sapphire for US $1 million.